Focus on My Ability

AFTER 29 SURGERIES, YOUNG MAN INSPIRES ON THE COURT 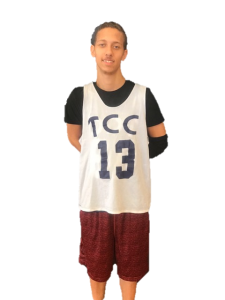 A local Tulsa Community College student, Brad Wales, will take to the court with his team the Midas Flyers, for the final game of their season at the Southeast TCC Campus. It is the last game for the team, but the first in which Brad will play without a feeding tube.

Brad was born three months premature at just one pound, 12 ounces, and 12 inches long. He spent the first eight months of his life in the Neonatal Intensive Care Unit. Born with a disorder that affects his bladder, he must use catheters regularly to prevent infections that may lead to kidney failure.

Brad’s mother, Kim, came to Ability Resources in need of catheters for her son, which were no longer covered by insurance. Days after she contacted Ability Resources, they received a donation of 3 months’ supply of the correct size Brad needed. “It was nothing short of a miracle that you all received exactly what we needed, just at the right time”, said Kim.

Six months ago, Brad went in for the twenty-ninth surgery in his 21 years of life. That medical emergency came months after Brad aged out of government benefits for his medical care. He was suffering a partial bowel obstruction, which led to the use of a feeding tube in addition to the catheter.

As supplies ran low, Kim began to stress once more, about how she would obtain the needed supplies. She received a call from Sandie Sullivan, Independent Living Councilor at Ability Resources. Sandie had received another donation of catheters that suited Brad’s needs. “You took up where the government left off and I can’t thank you enough”, Kim said about the agency.

“I have taught my son to proudly wear his battle wounds from his surgeries. He gets out there on the court with a feeding tube, catheter, and no one even knows he is hiding these under his uniform,” Kim proudly shares about Brad. He took a little extra caution on the court this season, but he is excited to play full out and shoot for the stars.